According to the latest local Hazard Mitigation Plan, the most frequent and devastating hazards in the SEMSWA region are floods, thunderstorms, and hail.

The June 6-7, 2012 hailstorm was estimated to cause $321.1 million dollars of damage making it the 4th costliest hailstorm in Colorado. (Rocky Mountain Insurance Information Association).

Disaster prevention includes modifying your home to strengthen it against storms so that you can be as safe as possible. It also includes having the supplies on hand to weather the storm. You should use common sense in your disaster prevention.

Assemble supplies you might need in an evacuation. Store them in an easy-to-carry container, such as a backpack. Include: 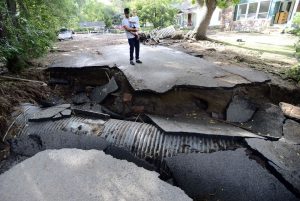 Floods are among the most frequent and costly natural disasters in terms of human hardship and economic loss. There are two types of floods of concern in this region: (1) a rising flood which occurs because of heavy prolonged rain or melting snow or both; and (2) flash floods which are characterized by quick rise and fall of flood levels. Rising floods typically occur in the spring at the peak of snowmelt. Flash floods typically occur during intense summer thunderstorms. Never take cover in a culvert or under a bridge.

IF YOU CAN HEAR THUNDER, YOU ARE CLOSE ENOUGH TO BE STRUCK BY LIGHTNING. HEAD FOR HIGHER GROUND.

Even a shallow depth of fast moving floodwater produces more force than most people imagine. The most dangerous thing you can do is to try walking, swimming, or driving through floodwaters. 2 feet of water will carry away most automobiles.

Lightning is the most dangerous and frequently encountered weather hazard experience by people each year. It is the second most frequent weather-related killer in the United States. Colorado ranks 10th in the United States in both injuries and deaths caused by lightning. In an average year, lightning kills 3 and injures 18 people. Most victims are struck while playing golf or field sports and while in or near water. It can strike as far as five or 10 miles from the storm.

Before storm season beings, remove dead or rotting trees and branches that could fall or be blown around and cause injury or damage during a thunderstorm.

If you find yourself outdoors or in an area where thunderstorms are in the forecast or about to happen, follow these precautions: 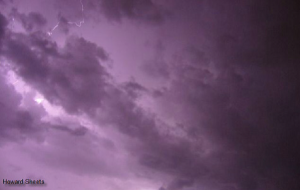 Hailstorms cause a major amount of damage to property and crops in Colorado every year. Hail forms during thunderstorms, and Colorado has more thunderstorm days than any other state except Florida. July 11, 1990: The metro area was hit by an intense hailstorm causing $625 million in property damage – the second most costly hailstorm in U.S. history. As a storm approaches:

After the storm, evaluate the condition of your roof to identify any damage and prevent further deterioration. 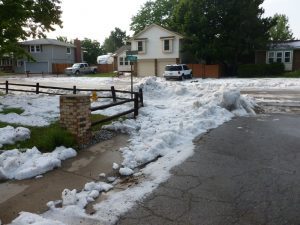 Colorado is no stranger to winter storms. In 1997, winter weather was responsible for 94 fatalities. In 1998, the number of winter-related deaths totaled 77. Exposure to cold, vehicle accidents, and fires caused by improper use of heaters all add up to a significant threat. A major storm can last for several days and be accompanied by high winds, freezing rain or sleet, heavy snowfall, and cold temperatures. It is important to take steps to winterize your home and car. Always carry an emergency supply kit in your car when traveling during the winter months and stay tuned to weather forecasts that may impact your area. Always dress correctly for the weather, even if you are only going for a short drive. The car may be warm, but you may be forced to walk for help if the car stalls or you are involved in an accident.

Assemble supplies you might need if you become stranded in your vehicle. Store them in backpack for convenience. 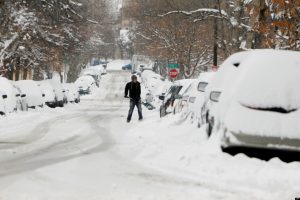 If you are caught in a storm or blizzard, and your car is immobilized, stay in the vehicle and await rescue. Do not walk from the car unless you can see a definite safe haven at a reasonable distance. Turn on the auto engine for brief periods to provide heat, but always leave a window open. Leave the dome light on at night to signal rescuers, and exercise occasionally by clapping hands and stomping your feet.

Along Colorado’s Front Range foothills, windstorms known as Chinooks can be common especially during the late winter.

In the Colorado Front Range, tornados have been reported nine months of the year, and the peak season for tornados extends from mid-May through mid- August. June is by far the month with the most recorded tornados. Tornadoes have occurred every time of the day, with over half of them developing between 3 p.m. and 6 p.m., and 88% occurring between 1 p.m. and 9 p.m. MDT. They also occur statewide, but by far the largest numbers develop east of I-25. 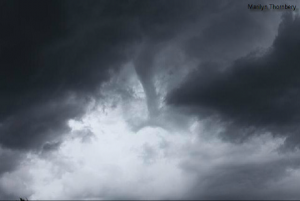 If a Warning is issued or if threatening weather approaches:

Heat can affect anyone. It is most likely to affect young children, the elderly, and people with health problems. Those with medical conditions that cause poor blood circulation, those who take medications to rid water from the body (diuretics), and certain skin conditions may be more susceptible to heat sickness than others. It is important for everyone to be prepared for heat emergencies.

NEVER EVER leave infants, children, elderly people, or pets unattended in a parked car. It can take as little as 10 minutes for the temperature inside a car to rise to levels that can kill.