Developers in the SEMSWA service area are assessed a System Development Fee (SDF) to allow SEMSWA to recover the costs of stormwater improvements necessary to manage stormwater runoff generated as a result of development, redevelopment and other improvements or added impervious area. The intent of the SDF’s is to fund the construction of new stormwater management facilities in a consistent and fair manner. On June 24, 2009, the SEMSWA Board of Directors adopted a System Development Fee Schedule Policy and a Fee Schedule to be applied to all new development or redevelopment in the SEMSWA service area.

For the purposes of determining SDF’s, the SEMSWA Service Area was divided into five Basin Groups which have in common the same watershed, similar percentage of the basin developed, similar level of development activity, similar age of development, same water district boundaries, and other special considerations . Within each of the drainage basins within the Basin Group, capital improvement projects have been identified that become the basis for the costs of remaining stormwater improvements that a development would need to construct to address the impact of the development on the stormwater system. The SDF takes into consideration the total cost of the capital projects identified in Master Plans completed for each Basin Group, the percent of remaining developable area within each basin in the Basin Groups, and the remaining developable impervious area in acres for each basin within the Basin Groups. The resulting calculation of the SDF is in units of ‘fee per impervious acre’.

SDFs are estimated at the time of the applicant’s pre-submittal meeting and finalized prior to execution of the Subdivision Improvement Agreement. Payment of the SDF is a condition of the GESC and/or Stormwater Public Improvement Permits. SDFs are charged on the basis of the acres of impervious surface resulting from the development activity.

There are a number of existing regional detention and water quality facilities in the Lone Tree, Windmill and Dove Creek watersheds. Funding for the construction of these facilities was provided by either SEMSWA or the Arapahoe County Water & Wastewater Authority (ACWWA). These Regional facilities benefit future developers by eliminating or significantly reducing the need for the developer to construct onsite facilities.

The costs associated with the SEMSWA constructed facilities have been/are being borne by the rate payers in the SEMSWA service area. The ACWWA regional facilities were constructed by developers, who entered into Reimbursement Agreements with ACWWA to be reimbursed for costs which exceeded their fair share of the facility’s total cost. The repayment of these Reimbursement Agreements is being assumed by SEMSWA as part of the transfer of ACWWA’s MS4 permit to SEMSWA.

In addition to SDF’s; developments, which benefit from an existing Regional facility, are assessed an ECF for all newly constructed impervious areas. ECF’s provide SEMSWA with a means of recouping its investment in Regional facilities and fulfilling the obligations of the ACWWA Reimbursement Agreements. ECF’s are computed on a watershed basis by dividing the total cost of the existing Regional Facilities in the watershed (SEMSWA costs plus ACWWA reimbursement costs) by the remaining impervious acres in the watershed.

On December 15, 2010 the SEMSWA Board of Directors adopted the amendment to the SDF fee schedule to include the ECFs to be applied to all new development or redevelopment in the SEMSWA service area for the Lone Tree, Windmill and Dove drainage basins. ECFs are estimated at the time of the applicant’s pre-submittal meeting and finalized prior to execution of the Subdivision Improvement Agreement. Payment of the ECF is a condition of the GESC and/or Stormwater Public Improvement Permits. 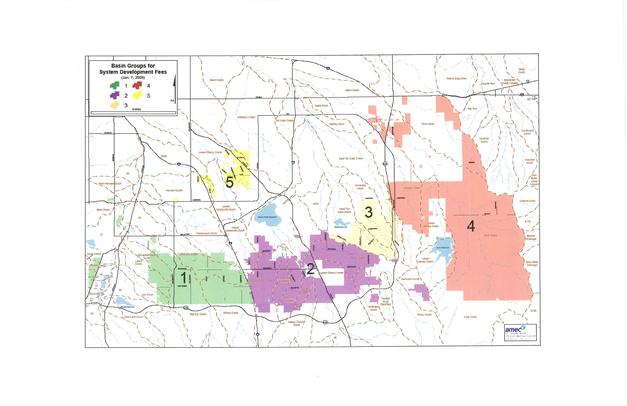 SEMSWA offers a Credit Program to customers that could reduce drainage basin fees.